The resulting six-part series features the natural beauty of the country and the welcoming spirit of its people. 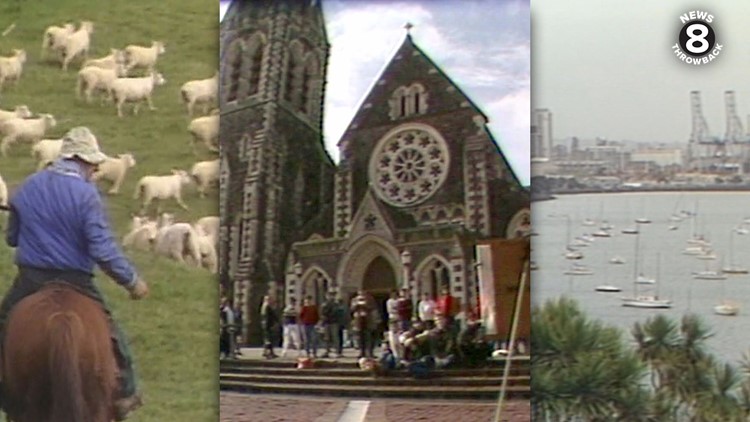 SAN DIEGO — In 1987, one of our News 8 crews drew the tough assignment of traveling halfway around the world from San Diego to New Zealand. The resulting six-part series features the natural beauty of the country and the welcoming spirit of its people.

In part 1 of the series, reporter Loren Nancarrow heads out on the 6,500-mile trek starting with an Air New Zealand flight. He shows off some of the lush green scenery of the countryside contrasted by the bustling city life in Auckland.

Loren also finds what kind of sports New Zealanders enjoy on the rugby field and at an indoor cricket game.

And though he was far from home, our reporter also found trout imported from California along with a small forest of our Redwoods.

Part 2 opens with shots of some of New Zealand’s natural features from picturesque vistas to bubbling mud pits. Next up we see Auckland, where the CBS 8 crew first touched down. It was then home to 800,000 people.

Out in the harbor, Loren found views of Auckland were different but just as spectacular. In the countryside, he found deer farmers touting the qualities of venison.

Very different scenery was up next in Waimangu Valley. The geothermal valley included steaming craters and a boiling lake that reached 140 degrees and up. Loren explained some of the history of the area.

“New Zealand is not only beautiful, it’s full of surprises,” he mused.

Next up in the third part, Loren explored the indigenous Maori people and a renaissance in their native art, culture and language. Young Maori men at a technical institute were learning to make intricate wood carvings sharing the legends of their ancestors. Meanwhile, Maori children were learning a forgotten language from their elders.

The scenery in parts 4 and 5 is spectacular. Our crew visited a 1200-acre sheep farm in the central part of the country’s north island. Sheep a-plenty roamed the beautiful hillsides. Loren said most animals were imported and there were no coyotes. A wild sight inside as sheep are sheared. A fast shearer can whip through 500 plus sheep a day. Harry was faster than most—in one minute two seconds, he removed six months of growth from a breeding ewe. Hundreds of homes were available for those that chose to vacation in the countryside. No doubt, this series inspired many San Diegans to book flights to New Zealand.

Nothing but the best for our crew- in part 5 they stayed at the Huka Lodge in Taupo. Loren said the price of a night’s stay would make a sheik from an oil-rich nation gasp. We looked it up and it’s still there!

Here they spent the day fishing for trout. A guide helped Loren, “a dedicated non-fisherman” try to reel one in.  You’ll just have to watch and see if he was successful. Even if he wasn’t, he was clearly having a great time.

The final part of the series is about a city on the South Island of New Zealand – Christchurch. It’s considered the most English city outside of England. And in English tradition, Loren enjoyed high tea at a beautiful Tudor style tearoom, The Sign of the Takehe.

This story wraps up with a humorous lesson in New Zealand sayings. Loren wondered if we really speak the same language when we say things in such  different ways:

News 8 photojournalist Scott Hall who was with Loren on the trip is still with the station and shared his memories of their amazing trip to New Zealand:

“One of the most colorful and interesting stories I’ve ever worked on I was just a few years into my career at News 8. The New Zealand tourism board had the brilliant – and for me absolutely amazing – idea of bringing a US West Coast camera crew Down Under. Who could say no to that? And the opportunity to work with Loren Nancarrow for a full week was never something I would turn down. The outtakes reel from this trip belies his true warmth and character.

So producer Bob Sioss, camera assistant/photojournalist Jim Myers and I joined Loren for an unforgettable journey through the North and South islands. We were given the red carpet treatment by our Kiwi guide from the moment we touched down in Auckland. Sailing the harbor, sampling the great food, soaking up the culture of native Maori, traveling through mud pots, trout fishing on Lake Taupo, overnighting at a sheep farm, flying high over glaciers of Mt. Cook, punting on the River Avon and mingling with Christchurch’s Cathedral Square buskers and speakers on their soapboxes… all vivid memories I carry with me 30+ years later! So much natural beauty and so many friendly people.